The combat at Grimbergen on August 23rd 1745

The combat at Grimbergen August 23rd 1745

I continue my series about the campaign in Flanders 275 years ago. (The post is online a little too early because I'm offline 23 August 2020.)


The maréchal de Saxe thought that his army had done enough for the year 1745[1]. However as before he could not go into his quarters in summer. The fall of Dendermonde on August 13th changed the situation dramatically as he lost the excuse to stay in his camp only observing the enemy. The maréchal was convinced that he had to conserve the area on the Western banks of the Dender, because he wanted to get his winter quarters there. Therefore he decided to cross the Dender and move towards the Senne. The operation started on August 17th and the army reached the new position between Lippelo and Merchtem. It was difficult to get foot and fodder in this area. The opponent’s raiding parties were preventing the inhabitants to bring foot to the French. Especially Grimbergen seemed to be a centre of allied harassment. Therefor the maréchal ordered the Liéutenant Général Danois[2] to take the locality on August 22nd[3].


The combat at Grimbergen


Danois had an impressive force of 12 battalions (regiments du Roi, Picardie, Touraine, Royal-Écossais), 20 companies of grenadiers, 250 men from the Maison du Roi, 500 gendarmes, 500 carabiniers, 4 twelve-pounders and 16 four-pounders departing on the evening of August 22nd from the camp at Lippelo[4][5].

Danois was facing only little resistance, when he arrived on August 23rd at 6 o’clock a.m. There were two castles nearby. Both were crewed by troops of the Pragmatic army and both were enclosed by a moat. One of them occupied by 100 Hanoverian soldiers and 3 officers capitulated immediately[6]. 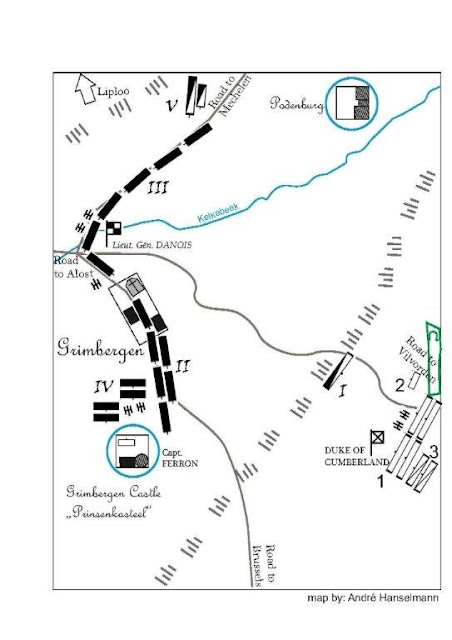 Now I had to research which castle this could be. There are many very helpful contemporary maps online from the Moll collection[7]. Problem was that the landscape changed dramatically since the 18th century as most of the area around Brussels is covered now by buildings and little is visible of the topographic features. Nevertheless Grimbergen is still well known for numerous very nice castles in the area[8]. Another problem was that the maps didn’t show roads and hills. Therefore I had to use the works by Le Rouge[9] and Seutter[10] to locate the hillsides and the map by Visscher[11] to learn about the historical road course. Coming from Lippelo and assuming that the smaller castle lies near Grimbergen, it seemed to me the most probable option that the “Podenburg”-castle[12] was attacked first.


Danois had sent his gendarmes as an outpost on a ridge towards the Brussel-Scheldt canal. The garrison of the bigger castle - 60 men of British free companies under the command of captain Ferron - refused to give up[13].


I suppose that the bigger castle lay more closely to the ridge and therefor behind Grimbergen, just because the carabiniers on the ridge south-eastwards are making more sense in this way. The closest castle on the Southern bank of the river Kelkebeek is the castle of Grimbergen[14]. Although today ruined, the castle still is an impressive architectural structure. The towers are bigger than those of the Podenburg-castle and an 18th century engraving of the castle dated from 1770 gives a good impression of the size of the moat and the towers[15].


The French grenadiers prepared for an assault on the castle. Danois’s troops brought artillery forward to shoot a breach into the walls.

However meanwhile the duke of Cumberland had learned about the French advance to Grimbergen and decided to bring help. He personally led a small detachment of elite troops 2.000 men strong to relieve his outpost. Cumberland used the road via Vilvoorde. He had 3 battalions of British guards, 1 battalion of Highlanders, 3 squadrons of Lifeguards, 3 squadrons of Dutch cavalry, 50 men of pickets, 2 six-pounders and 4 three-pounders[16]. It’s remarkable that he didn’t chose light troops like hussars as his colleague the Prince of Waldeck did on August 12th[17].  Besides we can notice the same absence of light troops in Danois’ detachment too. The high quantity of artillery surely hindered a fast movement. Maybe both commanders wanted to be more prepared for a serious larger engagement.

Cumberland attacked the gendarmes when he arrived on the ridge. The carabiniers fled to Grimbergen. The British positioned their artillery on the ridge line and commenced firing on the French infantry. The artillery fire and the rout of the gendarmes caused panic among the infantry in Grimbergen. The French ceased their fire at the castle and retreated in bad shape[18].


We wonder if Danois was not informed about the small size of Cumberland’s forces or if the often blamed lack of discipline among the French proved well founded again[19].


The French rearguard formed by the rest of the French cavalry wanted to offer the retreating infantry a chance to rally behind them. Although they had to give way hastily too as soon as Cumberland’s artillery started to fire upon them.


Cumberland didn’t pursuit. Maybe he knew better than his opponent the real balance of power. He sent some troops to occupy the smaller castle and the village of Grimbergen again. Then he ordered to march back behind the canal[20].

Although small in size and without significant losses on both size the encounter at Grimbergen had some consequences. The maréchal de Saxe had to realize the difficulties of his position and ordered a retreat of his large army behind the Dender during the September of 1745.

Analysing and preparing a scenario


It seems obvious to me, that Danois failed in many respect. He surely didn’t use his cavalry properly. He forgot to send pickets for reconnaissance duties, although he had plenty of cavalry for the job. I don’t know where his personal place was during the engagement. But how could he miss to realize, that his small army was 3 to 4 times larger than Cumberland’s detachment?


The lack of skills of his sub commanders perhaps makes the great success of Maurice de Saxe even more impressive. To defeat his enemy he maybe had a far numerical superior army but he had to calculate the lack of discipline of his troops as much as the bad performances of his generals in his plans.

Besides the mentioned maps I had to decide which leaders were plausible accompanying Danois on one and Cumberland on the other side.


For the French I used a French order of battle of 1746 by John Anderson[21]. I supposed that maybe the brigadiers of the Picardie-, Touraine- and Maison du Roi brigades were in command.


For the British I could rely again on the same OOB which I used for Assche already[22]. I assumed that the commander of the foot guards and the brigadier of the lifeguards were responsible for the infantry and cavalry.

I included the weakness of the French troops in my scenario. If I would not adjust in this sense, it would be an easy victory for the French even with Dithering commanders. Therefor the victory conditions should effect, that the French player has to be more cautious and compensate the low skills of his troops.

CinC The duke of Cumberland (Dep.)

1) independent - French vanguard on a hill


Both sides: breaking the enemy.


Castles: hard cover, movement across the moats halved[23] / soft cover if successfully shoot at (roll an additional 5-6 to shoot a breech)