Some thoughts on the encounter:

My dear readers, I want to continue my series about the 275th anniversaries of the battles of the Austrian succession. I noticed that most of my readers of the series are speaking English and therefore I decided to do without a German version. I assume that no Germans will argue about that and promise to write in German again for the postings about reenactment in Germany or something like the dancing series.

I asked myself for a long time, if I should try my Melle-scenario again or to avoid it. We will see the reasons after a close look on the event itself. If you didn’t read it already I would recommend looking into my first posting about the battle of Fontenoy[1]. The defeat at Fontenoy was not less than a decisive blow for the young commander of the Pragmatic army the duke of Cumberland. He had to retreat and the maréchal de Saxe meanwhile managed to capture Tournai. The complete French plan of invading the Low Countries as shown in McNally’s book was ambitious[2]. Cumberland realized that he had to hold such key positions like Ghent, if he wanted to defend the Austrian Netherlands. While he decided to defend Brussells with his main army, he decided to send at least some reinforcements towards Ghent.


The distance from Tournai to Ghent is remarkable comparing de Saxe’s move with more cautious or over cautious decisions of contemporary military leaders. In early July de Saxe had chosen du Chayla – a more prominent French commander during the campaigns in Flanders – to lead a force for reconnaissance in the area of Aalst and Melle.


The pragmatic force under the young Philip baron of Moltke was really a mixed group, including British, Hanoverian, Austrian and Dutch units[3]. However such a mix is appearing strange to us today and although we would think over huge problems regarding different languages, tactics etcetera, such a method was quiet common during the 18th century. We wonder how this all did work anyway. Moltke himself was in fact in charge over the Austrian forces at Fontenoy 2 months earlier, when his supervisor the old fieldmarshal Königsegg acted more as an advisor to the duke of Cumberland.


Although meeting du Chayla’s outposts near Aalst, Moltke didn’t change his plans. I would suppose that he was just confident in the quality of his troops, which is not really surprising when we look into the results of many Austrian skirmishes during the 1744 campaign, when they defeated numerical superior French forces repeatedly[4].  Du Chayla however could rely on some Arquebusiers de Grassin, which had performed very well at Fontenoy. Although I would doubt Berry’s praising designation as “an elite light regiment”[5] as they didn’t had much of experience at this time or special armament. The unit was “levé par ordonnance du premier Janvier 1744”[6] maybe responding on the demand of de Noailles, when the old marshal noticed the large superiority of Austrian light troops during the disastrous French campaign in Germany.


Lieutenant général du Chayla missed to rank his troops properly although he was alarmed by his light infantry outposts. The spearhead of Moltke’s column crossed the stream near the Prieure de Melle in the early morning of that fatal July 9th[7]. The unawareness of du Chayla becomes even more obvious, when we are reading about the chance for the British to capture a lot of French artillery at this moment of the battle[8]. But when the French infantry came into action, the baron von Moltke surely realized his personal danger and took some of his British and Hanoverian cavalry to leave the battlefield breaking through the French positions towards Ghent. When the French managed to strike earnestly Moltke could only save half of his troops under his personal command. He already had left the field, when brigadier Bligh finally arrived with his infantry and some cavalry. Bligh noticed that he had a considerable force in front of him. Differently from Moltke now Bligh formed a formidable battle line and had to deal with a French counter attack. Besides the terrain was not suitable for cavalry and the passage over the Grontrode Brook was not favoring a long line of infantry as well. Perhaps therefore the French could not profit as much as we would assume on a better terrain from their numerical advantage in infantry. Although defending himself very well, Bligh had to realize, that he had no chance to win this encounter, especially when du Chayla brought artillery in the fighting and the arquebusiers de Grassin turned up in Bligh’s back, capturing his baggage[9]. It’s noticeable that the contemporary painting by Lenfant in the collection of Versailles doesn’t show the terrain and focus on the French infantry attacking in masses with a village in the background[10]. 2 hours after Moltke’s first real trouble with the French near the small town of Melle, Bligh had to retreat after suffering heavy losses.


Within days the city of Ghent fell to the army under the comte de Lowendahl and the British units, which had managed to break through du Chayla’s lose line at the start of the battle of Melle were captured.

I can’t see that von Moltke cared about the destiny of most of his force as he left the battlefield before Bligh arrived. However that fact seemingly had no impact on his career as he was rising to the rank of Generalfeldmarschall through his career before dying in 1780. However maybe the family Moltke was too important to not be recognized by the empress later on. 8 members of the Moltke family served in the 13th regiment Moltke during her reign[11].

Researching about the campaign and especially about the battle of Melle, I had felt myself confirmed in my former observation, that small encounters often have bigger consequences then famous and large battles. We see the same at the battle of Simbach, when some quick decisions by the commander in chief over the Bavarian forces smashed the whole allied plans for the ensuing campaign of 1743[12]. The allied losses at Melle were significant although not such a way as Minuzzi’s in 1743. Both commanders underestimated their counterparts and lost the ability to react properly on the opponent, even abandoning many of their own forces.


After the victory at Pfaffenhofen[13] and the following treaty of Füssen now Melle was the 3rd significant defeat in 3 months for Maria Theresia’s cause. Frederick II. had turned the situation in Silesia to his favour, the French and Spaniards were invading Italy again and Maurice de Saxe gained the upper hand in the Low Countries. Melle was an important blow for the plans of the Pragmatic forces in the Netherlands. They not only had lost around 2.000 men killed, wounded or captured, but lost one of the most important towns of the Austrian Netherlands. However I loved Reed Browning’s sharp comparison of Hohenfriedberg and Fontenoy: “Prince Charles made many [mistakes]. Frederick made few. Since at Hohenfriedberg – and at this point the contrast with Fontenoy becomes clear – the ablest generals and the ablest troops were engaged on the same side, the outcome of the battle was dramatically one-sided.”[14] That will be a constant characteristic of the war in Flanders. The French had at least with de Saxe and Lowendahl really capable commanders, which made stunning moves. However the Pragmatic armies could rely on very good troops which could compensate the weakness in their high command. 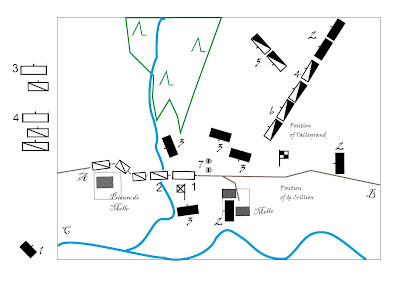 A game using Honours of war and giving a more vivid picture of the fighting:

I had written a scenario for a table top game using Honours of War 3 years ago. The scenario excluded the action at the château de Massemen near Aalst in the early hours of the July 9th 1745. However I tried to include the different moments of the encounter around Melle and the Prieur de Melle. Now it's time at the 275th anniversary.

Initiative turn 1, can destroy the French guns on a 2-6 (halting)

Guns could be destroyed after successfully charged on a 2-6